Changing the sourcing and procurement landscape for our customers

Our solutions benefit a wide range of customers from large government bodies and complex private sector organisations, to SMEs. They include government agencies in India, Africa and the UK, as well as the prestigious Indian Space Research Organisation (ISRO) and the Indian Department of Atomic Energy. In the UK we are already working with Vodafone, Capita and BT as well as the UK central government Department for Environment, Food and Rural Affairs (DEFRA).

The Municipal Corporation of Delhi is one of the largest municipal bodies in the world with over 14 million citizens. Its procurement bill is around £2.7 billion annually. The Corporation needed to handle multiple procedures and policies, and interface between many departmental systems, against a background of low IT awareness among users.

Using NexProcure the Corporation has customised its workflows to embed department-specific solutions. As a result it successfully handled more than 40,000 tenders within the first 36 months of adoption. To date 10,000 contractors have registered, 9,000 users trained, and 410,000 tenders have been issued worth US$21.5 billion. Its average tender cycle time has reduced from 90 days to only 30.

The use of NexProcure has enabled Botswana to adopt sourcing and procurement best practice. It has led to increased efficiency and reduced cycle times. NexProcure has delivered better and wider competition and because of its full audit trail, transparency and data validation via integration with ten major third-party databases, the possibility of corrupt practices has been radically reduced.

Power2SME is the first ‘Buying Club’ for small and medium enterprises in India. In particular this privately-held agency focuses on sourcing. It buys raw materials at the most competitive prices to supply SMEs with optimal pricing and a large pool of quality suppliers. Power2SME chose to work with Nextenders to optimise its procurement systems. The ultimate aim is to integrate into their ERP, making the complete process from sourcing to order placement seamless.

Serving a population of 25.5 million, the Government of Chhattisgarh wanted to improve the efficiency and transparency of its public procurement. Acting on the Government’s behalf, the Chhattisgarh Infotech and Biotech Promotion Society (CHiPS) chose to work with Nextenders ahead of international competition.

To date over 30 major departments have adopted NexProcure, which now has more than 6,000 active registered suppliers. Over 38,000 tenders with a value of R735.18 billion have been processed so far. Chhattisgarh has found that the system improved processes and efficiency, reduced cycle times, created better competition, and realised significant cost savings. Because NexProcure provides more transparency and accountability, corrupt practice opportunities are reduced. Chhattisgarh has twice been awarded the ‘BesteGovernmentState Award’ by the Computer Society of India since NexProcure was implemented.

ISRO is the primary space agency of India and among the largest government space agencies in the world. ISRO chose Nextenders to supply the platform which supports its centralised eProcurement System covering 14 sites across India. NexProcure was found to be the most suitable and readily available solution, and it met ISRO’s stringent and demanding security and technical requirements. In particular, ISRO’s procurement officers are not allowed to access the Internet. The Nextenders system securely gets around this restriction using a complex architecture of internal (intranet) and external (internet-facing) servers with a periodic secure sync feature.

To learn more about Nextenders sourcing and procurement solutions contact us or download our product sheets on NexProcure and NexProcureLite. 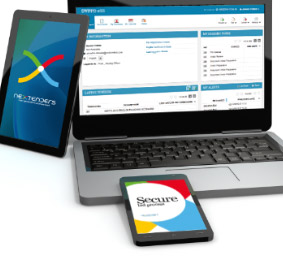